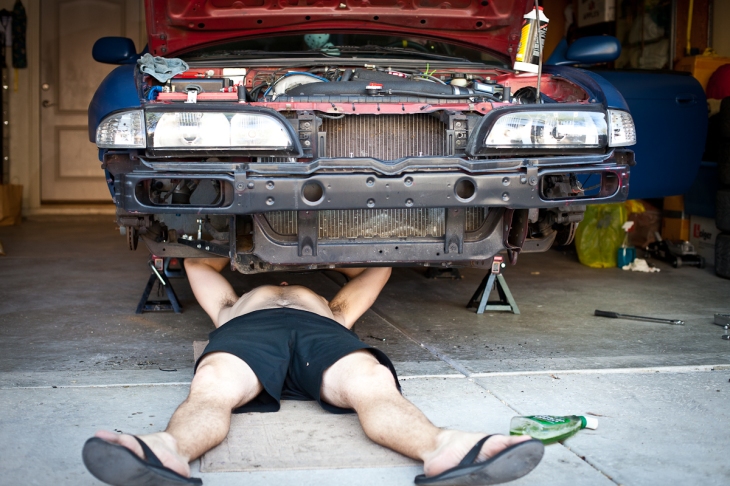 I found a car. Not the perfect car, but is there such a thing? This 240 was built mostly right by a guy who wanted to learn how to drift. He did his research and bought almost all of the basic parts to get the car to a point where a new guy can learn to drift without complaining that it didn’t have what it took. And then it sat uncovered in a dusty shed for around 6 months.

With the help of some dedicated friends, without which this venture wouldn’t have been reasonably possible, we stripped, scrubbed and rehabbed the car the best we knew how. Which, I might add, is probably not that great. I have the most mechanical experience out of the few of us, and that is mostly just from watching others and rarely hands on. But as in all new things, one rarely starts out skilled. I’m sure if you were to ask any drifter of any level about what they put into their cars, I’m sure they would all agree the gears of any drift ride are lubricated with blood and toil.

These guys. For every successful drifter I’m sure there are at least 3 die-hard bros willing to help out, even if the tasks are as minute as removing vinyl from the previous owner or drinking your beer. 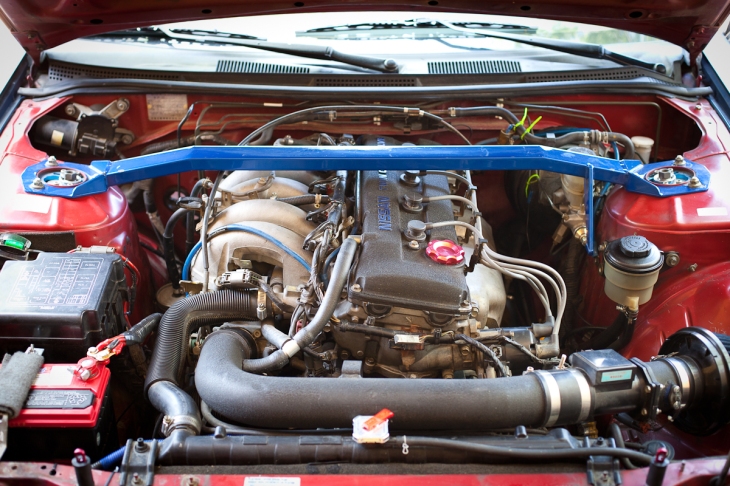 I think there are few things prettier than 90’s inline motors. Even if this specific example barely makes any power. After a bit of degreasing and effort we made this puny powerplant shine and purr happily (yet still noisily) after replacing all of its fluids and spark system. After my 3 events I am starting to realize that a bit more horsepower would really help – but I am dedicated to maximizing my low hp skills until this motor dies or until I feel there is little else to learn from from being slow. 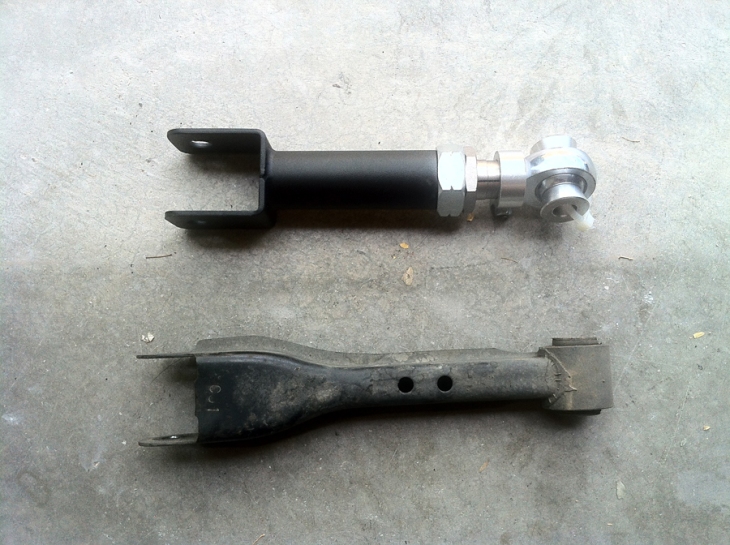 The previous owner had outfitted the car with nearly every SPL suspension component available for the chassis, but never got around to installing these rear traction rods. It was a great excuse for me to finally buy the cordless impact driver I had always wanted.

The car was definitely put away wet and has some rough edges, but rehabbing it has been an invaluable learning experience. I have no experience reglassing body panels yet, but I have certainly improved my zip-tying skills.

I was skeptical about the aesthetics of a rattle-canned, textured hood, but like most things on this car, it has slowly grown on me. I’ve had some over heating issues that a vented hood would likely help with, but hopefully as our temperatures drop below triple-digits it will become less of an issue. 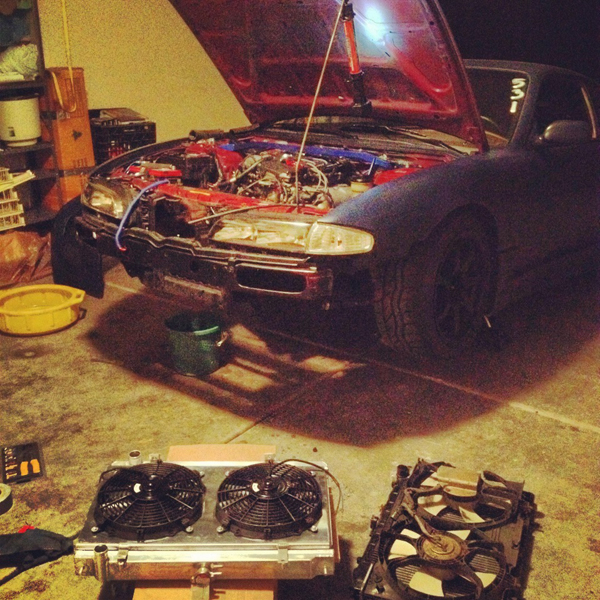 (Sorry for the terrible photo quality. I only had my phone during this night repair session)

I’ve been slowly replacing little things on the car as it becomes obvious that 200K miles of abuse hasn’t been kind to some of the weaker components. I replaced the previously installed Altima fans and stock radiator and hoses with Enjuku’s ISIS parts that are incredibly good considering their relatively minuscule prices.

Since I sadly don’t have the ability to tow the car to the track yet, I needed it to be street legal. The first time I attempted emissions I failed miserably (about 10x the acceptable amount of CO) and it prompted me to replace the stock catalytic converter (as well as the spark system, 02 sensors and coolant temp sensor) with a new high-flow cat.

It sadly still wasn’t enough. I only reduced my CO emissions by half, which was still well over the legal amount. I picked up and installed an ISIS fuel pressure regulator and hit the emissions station again running the minimum fuel pressure, and I was pretty shocked to learn that I somehow passed. Installing the FPR was actually pretty fun and was my first glimpse at learning the basics of the KA motor. 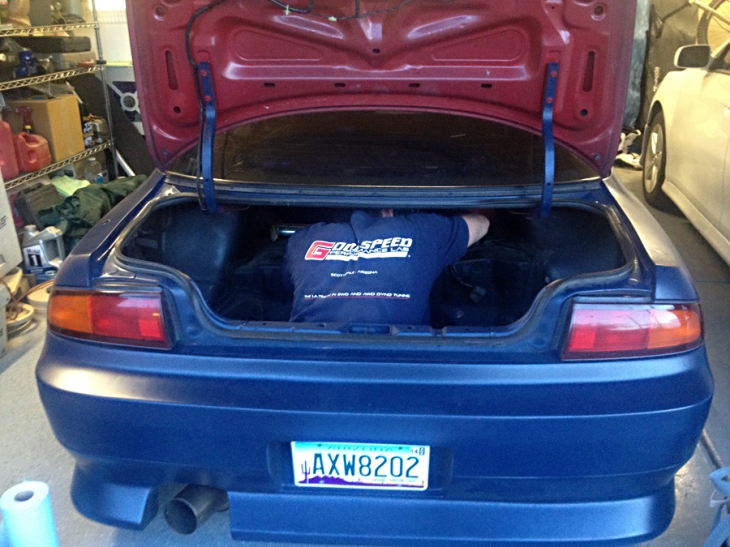 At my third event, some wiring to the Walbro fuel pump that the previous owner installed came loose on a corner and killed the car early in the night. I was so eager to get back out on the track that I stupidly and repeatedly submerged my hand in near-boiling gasoline to try and fix it without any effect. After some pep talking and burn cream, I geared up and did the job the right way a few days later in ideal conditions. Having the car fail so early in the evening was emotionally devastating, but it made getting back out there and kicking ass at the next event all the more important.

Keep in mind that all of this work was done in a garage with temperatures usually exceeding 110 degrees. I hear Washington has a good drift scene. And clouds. Clouds would be nice.

Where does that leave the car and I now? Everything should be just about ready for the next event in a few weeks. I just need some fluid changes and a few more zip tie bumper repairs. That reminds me – I need more zip ties.

I finally came up with a mantra for my efforts, and that is to “Suck Less.” When I think of my ultimate goal in this sport and the Drift Idiot venture, it is simply to have fun and to be better than I was the previous day. I just made a few “prototype” shirts that me and a buddy will be wearing in Irwindale this weekend with my home made zip-tie font. If there’s enough interest, stickers and shirts will be available for giveaway or purchase soon.

Thanks for reading! I can’t wait to share my progress and what I will learn from drifting’s greatest. I hope you all join me down this fun-filled and smoky road.

Check out my first 2 drift event videos here and the 3rd should be completed very soon!

And please check out Drift Idiot regularly at the site, Facebook, and Twitter for more updates and general awesomeness.